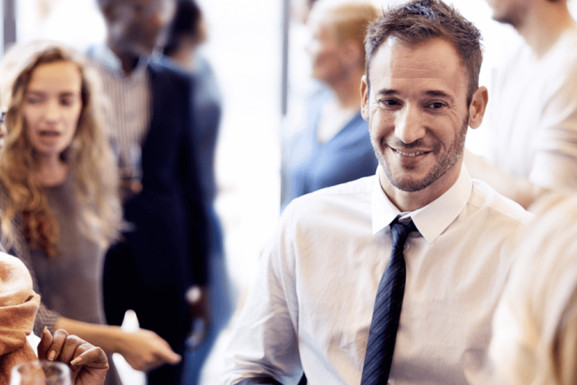 Networking & introvert people, it doesn’t seem like a great match at first. Most introverted people tend to not like networking. Some go nervously, bowing to pressure from work; others try to avoid networking events altogether, via excuses or by career choice. Yet there is a better way, even introverts can enjoy and benefit from networking even if it’s not their favourite activity. I spoke with a few people not liking networking, and this is what I learned from them:

Focus on the community:

View the networking event as an opportunity to catch up with like-minded people, rather than to sell. Networking in it’s essence is building a professional community, rather than a quick deal. Longer-term connections are the preferred way of socialising for most introverted people. If sales is part of your remit, keep in mind that people buy from people they like, know and trust, so an introvert’s natural preference of building long-term relations will help you in your networking journey.

No need to brag at the networking event:

Introverted people tend like quality content more than a snappy sales pitch. No wonder networking may feel a bit awkward if it feels like you need to have all your unique selling points crammed into an elevator pitch. The good news is that networking is not a contest for the perfect pitch; it’s rather an informal getting to know each other with the option to do business later. This approach feels much more relaxed, and hopefully, will make networking a smoother process for you.

Build on reputation, and potentially upsells:

You’re much better off building a great reputation for yourself based on merit, which introverted people tend to be good at anyway. Once people work with you, they are much more open to a conversation on how they can further excel with your services or do things in a better way. Then the sale comes from a place of trust and interest in the quality of your work, rather than a shiny pitch.

Use your listening skills:

Introverted people tend to be very good at attentively listening to others, more so than an extroverted person generally tends to. Use this skill wisely to learn more about the goals of the other person. I’ve heard introverted people say that often their client’s actual goal is quite different from the goal they say they have, and a great listener helps the client achieve their goals and you to progress in your work with them.

You can be choosy:

Focus on having fun and meeting people you like. You don’t necessarily need to build extensive relationships with everyone you meet on the networking floor. Just getting to know a few like-minded people helps already to build your network. You can be choosy on organisations you want to work with, that align with your values and purpose in life. So don’t worry about having to connect with everyone on a networking floor; just focus on the people and organisations you feel a connection with.

I hope this article helped you to enjoy networking more, and get more out of it too!  If any questions or after-thoughts, feel free to pop them in the comments.

Like this blog? Stay tuned for future blog posts! :-)

We respect your privacy and will not sell or share your email address. You can unsubscribe at any time.

PrevPreviousTalking sales at a networking event